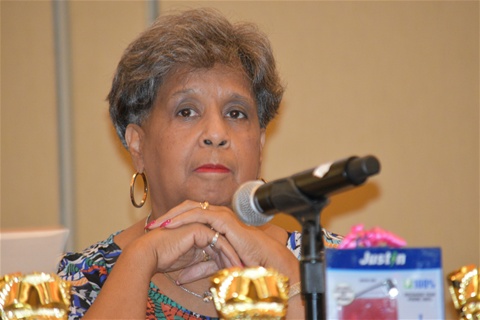 In the late 1990’s, I found myself intrigued with Oprah’s Book Club and the emergence of Terry McMillan and other AA authors. This led me in August, 1998 to found The Reading Divas Book Club, an almost desperate move on my part, to bring balance to my life as a wife and mother, who also held a stressful full time job. Belonging to this sisterhood has seen me through both good and bad times and eventually led to my post retirement life as a literary event planner, book club consultant and published author.

In October, 2008, to celebrate our 10th anniversary, The Reading Divas, held a celebratory Literary Brunch. Award winning author Mary Monroe was the keynote speaker. We decided on a brunch and author expo because we had begun to notice many of the brick and mortar stores, where AA authors and readers once gathered, were closing. Troy Johnson, Founder of AALBC.com confirmed that in March 2012, when he wrote “..we had lost 66% of our Black owned bookstores in the United States over the previous decade”. Earlier this year he reported “Two years later almost half the stores still open in 2012 have closed”.

I believe literary events are a very effective way to bring book clubs, authors and avid readers together to help narrow the gap left by the closing of book stores and to show support for the often underrated AA author.

In January 2012, I asked the book club members to support my decision to turn the brunch into a two day networking conference for authors, avid readers and book club members. They agreed and the Black Authors & Readers Rock Weekend came to life. Karen Quinones Miller spoke at our first Friday evening reception and Pamela Samuels Young and Mary Monroe were the luncheon keynote speakers. Since then our keynote speakers have included best selling authors ReShonda Tate Billingsley, Kimberla Lawson Roby, and NAACP Image Award winners Victoria Christopher Murray and Dwayne Alexander Smith. Authors and readers have traveled from California, Florida, Texas, New York, New Jersey, Pennsylvania, Georgia, Illinois and the Carolinas to be part of this conference that is described by many as one of the best literary events they have attended.

You may obtain information about next year’s conference at www.blackauthorsandreadersrock.simplesite.com and on Facebook at www.facebook.com/Readersrockweekend.